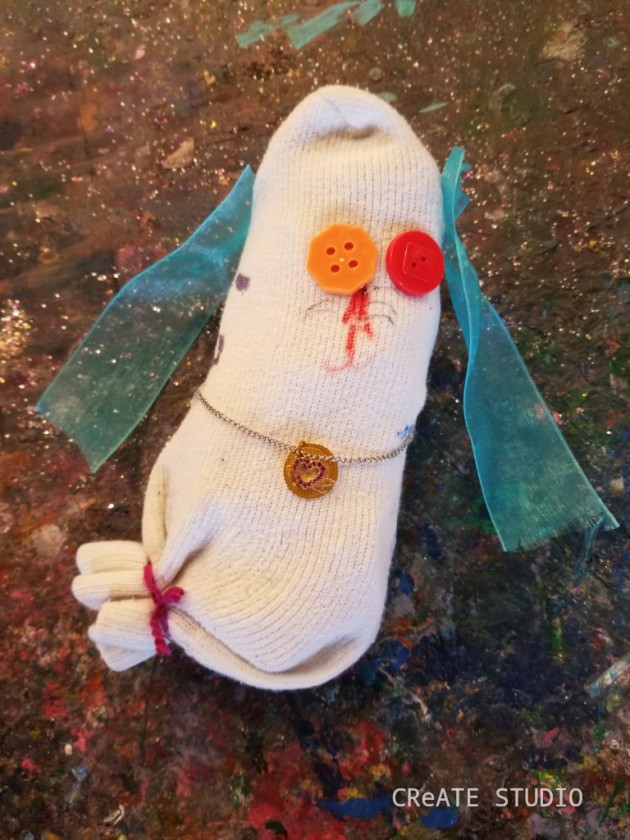 #30daysofreuse day 8 says, save the other sock!
There are a few ideas here so stay with me, it circles around.
If your pair becomes separated, no matter, make it into a new friend. This is a great creating at home idea for kids and families using minimal materials with a big emphasis on reuse and new possibilities.
Keep it simple. Take the lone sock and draw a look of some sort on it with a marker to make a puppet. Stuff it with waded paper, cotton balls or another lonely sock to make it into a 3D character. When finished, make it a family affair, put on a puppet style show with the new character.
The inspiration for this post was sparked by a conversation with the Girls Scout Daisy who made this sock pup today. She was inspired by a sock puppy she saw in the studio and wanted to make her own. We talked about how she may have lone socks at home that could become sock friends. She could even use just paper to stuff them. She told me that her dad had throw away socks she could use and the imaginings of what was possible with just a sock started to turn, fast. We talked about puppet shows and characters and the wonders that now existed with just a plain sock.
Daisy Girl Scouts were visiting the studio to work on the “Reusing Resources Wisely” patch today where they learned about making any number of things from a Kleenex box. The next natural step was to explore materials that inspired them and that’s where this sock-friend was born. Our conversation and the Ah-Ha moment that was heard about lone socks was just what the Girl Scout Motto sought to inspire, “use resources wisely”.
My conversation with my Daisy friend made me think that this is the path to Sustainability. As Henry David Thoreau said in part, “Nothing in nature is exhausted in it’s first use”. Just because a sock set becomes one, it should not become none. The lone sock is an inspiration to young Daisy’s and to funny comedians like Seinfeld- have you seen his latest stand-up special, Jerry Before Seinfeld on Netflix? I was dying about the lone sock in the dryer!
However you slice it, just because a sock is single doesn’t mean it should be banished. Rethinking the sock is a step toward sustainability, a step toward rethinking what we already have, that is where sustainability lyes in our consumer era. Use stuff a few times before you let it go but, don’t throw it away, pass it on to a donation center or CReATE or recycle it. Thoreau will thank you and so will I. Maybe Seinfeld will too 🙂